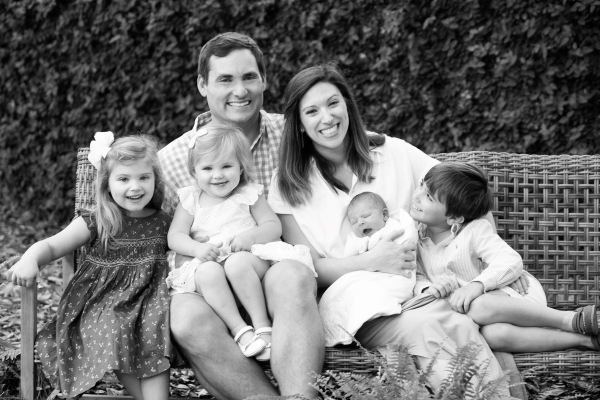 Dr. Brittney was born and raised in Pensacola, Fl. She graduated from Florida State University with a degree in Exercise Physiology. She then went on to Auburn University to earn her Masters in Public Health. Soon after, she moved to Birmingham, Al and attended UAB School of Dentistry and earned a D.M.D. degree. Dr. Brittney began her practice at a pediatric clinic in Birmingham treating underserved children. Her next move was to Mobile, Al where she worked as a general dentist. She opened Allgood Dentistry in Daphne in February 2014. Dr. Brittney loves living on the Eastern Shore with her husband Alan, and her four children, Thomas, Leighton, Ellis Ann, and Henry. She enjoys spending time with her family and friends, cooking, the outdoors, and Auburn football.

Dr. Alan practices at Dentistry of Foley in Foley, AL. We decided to give him a short bio just in case you see him hanging around from time to time. He was born and raised in Florence, Al. From there he went on to the the University of Alabama and graduated with a degree in Chemistry. Dr. Alan went on to earn a D.M.D. degree from the UAB School of Dentistry in Birmingham, Al where he met Brittney. He practiced dentistry in Muscle Shoals and Birmingham before moving to the Eastern Shore. Alan enjoys spending time with family, golf, outdoors, movies, and the Alabama Crimson Tide.

Jennifer is our dental assistant. She has over 15 years of experience in dental assisting. She has worked in both periodontal and prosthodontic offices and is excited to bring her expertise to our family practice. Jennifer is Radiation Health and Safety certified by the Dental Assisting National Board and certified in CPR for the Professional Rescuer by the Red Cross.

Jennifer and her family moved to Baldwin County in January 2014 from Connecticut. She currently lives in Spanish Fort with her husband Steve and their children, Lucas and Brooke. In her spare time, Jennifer enjoys watching her children play sports, going to the beach, reading, and spending time with friends and family.

Beverly has over 20 years of dental experience. She completed her dental hygiene education in 2003 at the University of Alabama at Birmingham. She has worked in private practice with both children and adults.

Beverly is a native of Baldwin County. She is married to her husband, James. They have two children, Pierce and Nate. She enjoys traveling, camping, the beach, and Auburn football.

Leslie is our patient and insurance coordinator.  She has over 23 years of experience in the dental field.  She started her career in the dental industry as an orthodontic assistant and then moved on to general dentistry.

Leslie and her family moved to Baldwin County in July 2013 from Pensacola, FL.  She currently lives in Daphne with her husband Sam, their two children Dylan and Kinsey, and their two dogs Bear and Birdie.  She enjoys spending time with her family and friend, working in her garden, and walking her fur babies.

Stephanie has over 10 years of dental experience. She began working in dentistry in 2009 and went on to complete hygiene school in 2012. She loves working with patients of all ages.

Stephanie is married with three children. She is a native of Birmingham, AL. In her spare time she enjoys spending time with family, going to parks or the beach, and watching Alabama football.